Hero Fighter 2 APK is an action game inspired by famous superheroes. Join the game, you will transform into a superhero specializing in destroying bad guys to protect the peace of the whole city. Get ready to enjoy the next-generation AAA graphics platform this game has to offer.

Note: You can also find some similar games on our website like Spider Fighter or Shadow Fighter 2.

It is not difficult to become powerful superheroes in the present time thanks to the emergence of games on mobile platforms. Now, you can become the ultimate spiderman through Hero Fighter 2. This is a game from the publisher Superhero Academy and it is extremely suitable for the audience of Spider-Man fans. The entire content in the game has also been optimized for mobile devices so you can experience it in the most enjoyable way. Download this game through Google Play to become a superhero protecting the peace of the whole city.

Without any lengthy introduction, Hero Fighter 2 allows players to become a superhero similar to Spider-Man from the very first time. Here, you will come a large city full of criminals appearing everywhere. They constantly cause chaos for the whole city and make people’s life very difficult.

This is where a superhero like you needs to help or else the city will fall into chaos. Everyone needs you to drive the supervillains out of the neighborhood. Of course, you can also do whatever you like in this game to enjoy the relaxing experience it brings.

In Hero Fighter 2, you not only confront weak thieves, but also the appearance of giant Bosses. They are all dangerous enemies with strong damage ability, just a moment of distraction will make you instantly defeated. The battle scenes in the game are very smooth, accompanied by a diverse skill system that will definitely make you feel like you are watching a real superhero movie. The combat environment will also change regularly to give players the most refreshing experience.

Hero Fighter 2 possesses a relatively familiar and accessible control method for any player audience. You control the superhero to move through the virtual steering wheel button that appears on the left side of the screen. Also, the fighting skills are integrated on the right of the screen like other fighting role-playing games today. 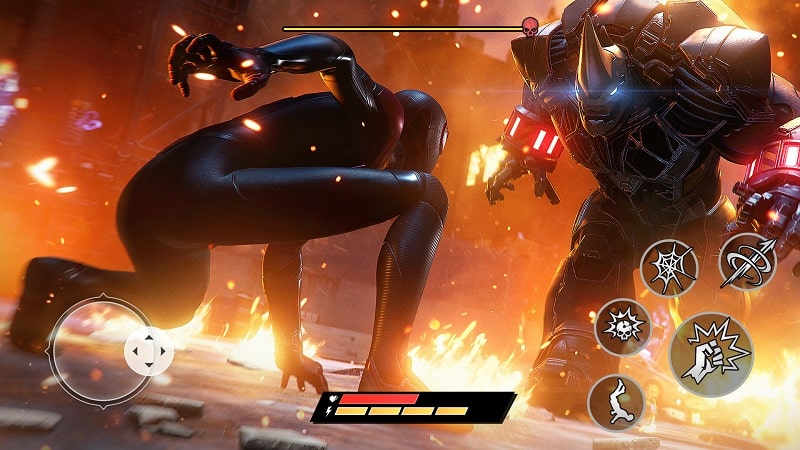 Basically, you need to combine actions effectively to create great combos and destroy opponents quickly. Besides, the character’s HP indicator bar corresponds to the life index. If the HP bar is depleted, it is also time for you to start the war from the beginning. At the same time, you should also carefully read the information on the skills to come up with appropriate combat methods.

The absolute power of the superhero will be shown through the built-in great skills. Accordingly, Hero Fighter 2 allows players to collect cash to unlock new skills or perks throughout the game. At the same time, passive skills also play an important role in helping you win in duels with enemies. Here, you will have the opportunity to observe the special skills of Spider-Man and do everything to win.

As mentioned, the combat environments in Hero Fighter 2 will constantly change to give players new experiences. The fantasy environments in the game are built very carefully, from dark cities to skyscrapers. You will do everything to defeat the enemies in front of you to keep the city at peace. New locations will constantly open with completely new designs. 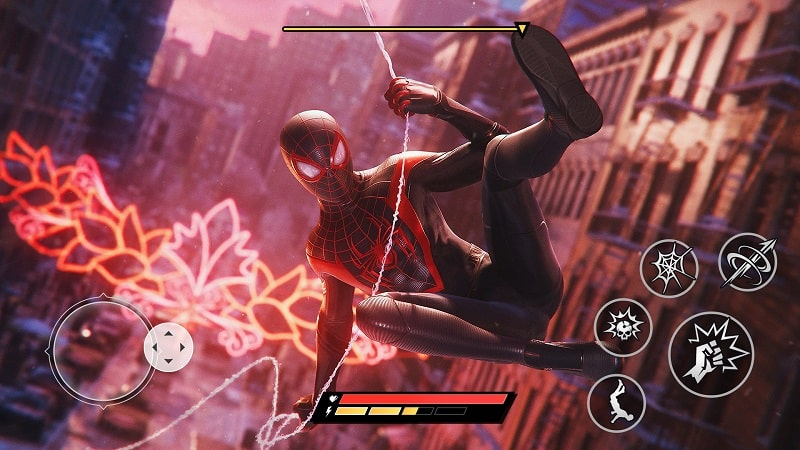 The graphics quality of Hero Fighter 2 is so good through the details that appear on the screen. At the same time, this game is also equipped with optimal AAA technology to help players enjoy impressive role-playing battles. The images of the characters are also described very vividly, giving players an extremely impressive feeling when experiencing them. In addition, the attractive sound factor will also contribute to ensuring the content always brings the highest quality.

How to install Hero Fighter 2

Step 3: Complete the installation within 1 minute, then click on the icon on the screen to play the game.

Hero Fighter 2 is ready to give you the most realistic spiderman superhero experience. You will have the opportunity to do justice in the city by defeating other dangerous opponents. Moreover, the power of the superhero will increase continuously over time to help you easily defeat other opponents.